Today is the Feast day of Our Lady of Guadalupe. Pope Pius XXII gave Her the title “Empress of the Americas” in 1945.

She is a prime example of what separates Catholic Christians from everyone else (including other Christians). There are many excellent articles that have been written over the years about the Miracles surrounding Our Lady that defy Scientific explanation.

In the 1640’s a Nahuatl and Spanish account tell the story of how the peasant Juan Diego, walking from his village to what is know today as Mexico City on the morning of December 9, 1531, encountered a vision of Our Lady surrounded by light on the slopes of Tepeyac.

As Juan Diego neared the hill’s summit, something extraordinary happened. Unseen birds began to sing in a supernatural way. The birds would pause while others responded, forming a heavenly duet. He thought he was perhaps dreaming and pondered how unworthy he was to witness something so extraordinary.

The heavenly symphony stopped and a sweet voice called him from the hilltop, “Juanito. Juan Diegito.” Hearing this, he happily ascended the hill. What he found upon reaching the source of the voice changed his life forever. There, on a rock, stood a beautiful lady. Everything around her was transformed. Her clothing was radiant as the sun. The rock she stood on seemed to emit rays of light. She was surrounded with the splendors of the rainbow. Cacti and other plant life nearby looked like emeralds. Their leaves were like fine turquoise and their thorns sparkled like gold.

Juan Diego bowed before her in ceremonious respect. A tender dialogue between Our Lady and Juan Diego followed, “Listen, xocoyote mio, Juan, where are you going?”
Rejoicing, he happily responded, “My Holy One, my Lady, my Damsel, I am on my way to your house at Mexico-Tlatilulco; I go in pursuit of the holy things that our priests teach us.”

The celestial lady revealed to him that she was indeed the Mother of God, telling him of her desire to have a church built, where she might bestow all her love, mercy, help and protection. She showed overflowing love to Juan Diego, “and to all the other people dear to me who call upon me, who search for me, who confide in me; here I will hear their sorrow, their words, so that I may make perfect and cure their illnesses, their labors and theirs calamities.”

Then Our Beloved Lady, respecting the authority established by God, sends the noble Juan Diego with this message to the bishop elect of Mexico. She tells him to accomplish the mission diligently, promising to reward his services. He bows, telling her that he will go straightaway to fulfill her wishes, and departs.

Frey Juan de Zumárraga was one of the first twelve Franciscan missionaries to go to Mexico and the first bishop of that new land. When Juan Diego reached the bishop’s palace, he promptly announced he wished to deliver a message for the bishop. The servants made Juan Diego wait before allowing the audience. Obediently, and with great enthusiasm, he told the bishop what he had seen and heard. Bishop Zumarraga listened attentively, but told Juan Diego to return when they could discuss the matter at greater length. After all, how did he know the story was true?
Juan Diego returned to Tepeyac Hill. As he approached the hill, Our Lady was waiting for him. He drew near and knelt. With sadness, he told Our Lady that he failed in his mission. The marvelous dialogue continues, “My Holy One, most noble of persons, my Lady, my xocoyota, my Damsel . . . .” 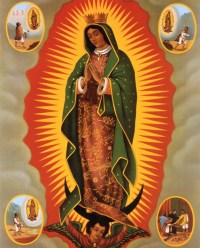 Juan Diego explained why he failed, how unworthy he was for such a mission and how the bishop was suspicious. Our Lady listened tenderly and patiently as he suggested she send one of the well-known and respected lords of the land. Then, he thought, her message would be believed.

Our Lady was not persuaded. She wanted him to accomplish the mission, and said, “I pray you, my xocoyote, and advise you with much care, that you go again tomorrow to see the bishop and represent me; give him an understanding of my desire, my will, that he build the church that I ask . . . .”

Read the rest of the Story Here

In 1979 Philip Serna Callahan investigated the composition of the image through infrared photography (used to detect sub-surface layers not visible to the naked eye). He identified the moon, sun-rays and sash, stars and nahui olin, among other elements, as standard “International Gothic” additions, possibly from the second half of the 16th century. The original image beneath these, namely the hands, face, blue mantle and rose-coloured robe, showed no underdrawing, sizing or overvarnish. 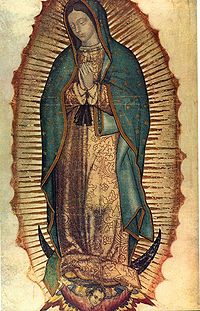 Digital technology is giving new leads for understanding a phenomenon that continues to puzzle science: the mysterious eyes of the image of Our Lady of Guadalupe.
The image, imprinted on the tilma of a l6th-century peasant, led millions of indigenous Indians in Mexico to convert to the Catholic faith. Earlier this month in Rome, results of research into the famed image were discussed by engineer José Aste Tonsmann of the Mexican Center of Guadalupan Studies during a conference at Pontifical Regina Apostolorum Athenaeum.

For over 20 years, this graduate in environmental systems engineering at Cornell University has studied the image of the Virgin left on the rough maguey-fiber fabric of Juan Diego’s tilma. What intrigued Tonsmann most were the eyes of the Virgin.

Though the dimensions are microscopic, the iris and the pupils of the image’s eyes have imprinted on them a highly detailed picture of at least 13 people, Tonsmann said. The same people are present in both the left and right eyes, in different proportions, as would happen when human eyes reflect the objects before them.

Tonsmann said he believes the reflection transmitted by the eyes of the Virgin of Guadalupe is the scene on Dec. 9, 1531, during which Juan Diego showed his tilma, with the image, to Bishop Juan de Zumárraga and others present in the room.

In his research, Tonsmann used a digital process used by satellites and space probes in transmitting visual information.

He insisted that the basic image “has not been painted by human hand.” As early as the 18th century, scientists showed that it was impossible to paint such an image in a fabric of that texture. The “ayate” fibers used by the Indians, in fact, deteriorate after 20 years. Yet, the image and the fabric on which it is imprinted have lasted almost 470 years.

Today the shrine of the Virgin of Guadalupe is the most visited Catholic pilgrimage destination in the world. Over the Friday and Saturday of 11 to 12 December 2009, a record number of 6.1 million pilgrims visited the Basilica of Guadalupe in Mexico City to commemorate the anniversary of her appearance 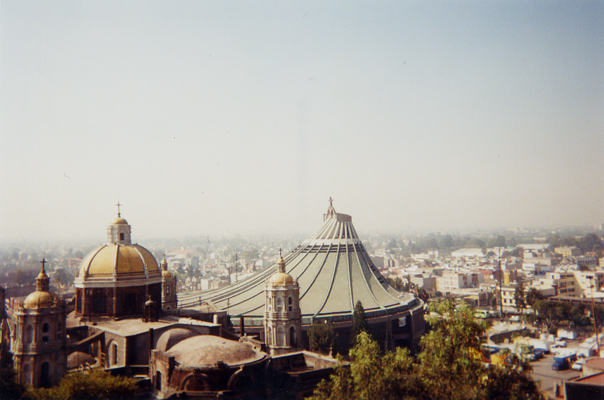 The Virgin of Guadalupe is considered the Patroness of Mexico and the Continental Americas; she is also venerated by Native Americans, on the account of the devotion calling for the conversion of the Americas. Replicas of the tilma can be found in thousands of churches throughout the world, and numerous parishes bear her name.

One thought on “Our Lady of Guadalupe – “¡Viva la Virgen de Guadalupe!””