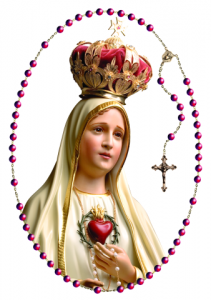 Today is definitely a Very Good Day to Pray the Rosary!  What better way to Honor Our Lady of Fatima?!

On my trip to Rome…

Soon, I will share with you all about it, I will.  There is just so much going on at STJW.  Steubenville, the Talks…  And it has never been more evident to me, as it is now, how Absolutely Correct Hilary was when sharing with us all the “Dangers of Blogging.”

She warned that there exists the possibility of spending too much TYme on the Keyboard and not enough tIMe with our Families…I am here to tell you that she is Spot On!

I haven’t been keeping you posted because I have been trying to do all these other things, like work, help at my Parish, try to do housework, be a Mom, a Wife, a Friend, a Sister, and have a Life!  To be quite honest, it is SO not working out…as of Yet.  I will figure it out!

But getting back to Our Lady of Fatima…When I was in Rome I was fortunate enough to visit San Benedetto’s Church near Vatican City, in Trastevere.  The Church of The Heralds of the Gospel.  This Church housed St. Benedict!  Well, to be more precise, the Church was constructed on the ruins of The Aniciii’s home.  Not only does this small, tiny, hidden Church have that bit of Glory to it, but they also have the Religious Statue of Our Lady of Fatima…Her Picture, Her Image is what the Herald’s here in our Parish, and all over the World, share with our Communities via a Shrine (click on the link to read more about the Herads’ Celebration today).

There is nothing more Powerful or more Beautiful than Praying the Rosary together in Family.  Not AS a Family, for we are all a Family.  But IN Family.

If you don’t have the “Habit” of Praying the Rosary together, if at all, do it tonight.  Do it today.  Honor Our Lady with a Bouquet of 50 Beautiful Red and White Roses.

Between May 13 and October 13, 1917, three Portuguese children received apparitions of Our Lady at Cova da Iria, near Fatima, a city 110 miles north of Lisbon.  Mary asked the children to pray the rosary for world peace, for the end of World War I, for sinners and for the conversion of Russia. The third visionary, Lucia dos Santos, became a Carmelite nun and died in 2005 at the age of 97.

Mary gave the children three secrets. Since Francisco died in 1919 and Jacinta the following year, Lucia, who later became a Carmelite nun, revealed the first secret in 1927, concerning devotion to the Immaculate Heart of Mary. The second secret was a vision of hell.

Pope John Paul II directed the Holy See’s Secretary of State to reveal the third secret in 2000; it spoke of a ‘bishop in white’ who was shot by a group of soldiers who fired bullets and arrows into him. Many people linked this to the assassination attempt against Pope John Paul II in St. Peter’s Square on May 13, 1981.

The feast of Our Lady of Fatima was approved by the local bishop in 1930; it was added to the Church’s worldwide calendar in 2002. Sister Lucia died in 2005 at the age of 97.

The message of Fatima is simple: Pray. Unfortunately, some people—not Sister Lucia—have distorted these revelations, making them into an apocalyptic event for which they are now the only reliable interpreters. They have, for example, claimed that Mary’s request that the world be consecrated to her has been ignored. Sister Lucia has agreed that Pope John Paul II’s public consecration in St. Peter’s Square on March 25, 1984, fulfilled Mary’s request. The Congregation for the Doctrine of the Faith prepared a June 26, 2000, document explaining the “third secret” (available at www.vatican.va).Mary is perfectly honored when people generously imitate her response “Let it be done to me as you say” (Luke 1:38). Mary can never be seen as a rival to Jesus or to the Church’s teaching authority, as exercised by the college of bishops united with the bishop of Rome.

“Throughout history there have been supernatural apparitions and signs which go to the heart of human events and which, to the surprise of believers and non-believers alike, play their part in the unfolding of history. These manifestations can never contradict the content of faith, and must therefore have their focus in the core of Christ’s proclamation: the Father’s love which leads men and women to conversion and bestows the grace required to abandon oneself to him with filial devotion. This too is the message of Fatima which, with its urgent call to conversion and penance, draws us to the heart of the Gospel” (The Message of Fatima, Congregation for the Doctrine of the Faith, June 26, 2000).

One thought on “Our Lady of Fatima”