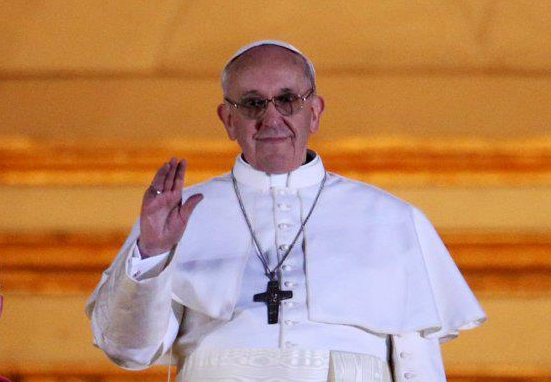 I know you know…you know.

But I have not been in front of my Computer until now, so…

Jorge Mario Bergoglio, SJ (Society of Jesus) from Argentina who takes the name, Pope Francis I.

Pope Francis makes a little joke in his first words to us.  😀

“As you know, the duty of the conclave was to appoint a bishop of Rome, and it seems to me that my brother cardinals have chosen one who is from far away, but here I am,” he told the crowd.

What a cool guy to be chosen pope! The first Jesuit, first to choose the name Francis, rides a bike to get around town, serves the poor in Argentina, runs a tight ship in his (former) diocese, and cracked a joke during his first speech as pope. The Church will definitely be transformed under Pope Francis I!

—————
A glimpse into the mind of Papa Francesco I:

“In our ecclesiastical region there are priests who don’t baptize the children of single mothers because they weren’t conceived in the sanctity of marriage. These are today’s hypocrites. Those who clericalize the Church. Those who separate the people of God from salvation. And this poor girl who, rather than returning the child to sender, had the courage to carry it into the world, must wander from parish to parish so that it’s baptized!…Jesus teaches us another way: Go out. Go out and share your testimony, go out and interact with your brothers, go out and share, go out and ask. Become the Word in body as well as spirit.”

2 thoughts on “Though You Already Know…”