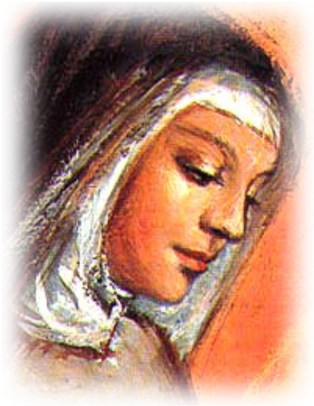 We just celebrated the Feast Day of San Francisco de Asis and it is quite natural that when one thinks of St. Francis, one think of St. Clare of Assisi.

Well, this morning in my Inbox I found the most moving article by  Friar Jack Wintz.

I just had to share it with you all…

It was August 11, 1993. I had just taken lunch at St. Francis Friary, our Franciscan headquarters across the street from the St. Anthony Messenger building. I have worked as an editor and writer there for many years. After lunch, I stopped to say a prayer in the friary chapel. At the foot of the altar, I noticed a picture of Sts. Francis and Clare of Assisi standing together. The picture had been placed there because of St. Clare’s feast.

With the support of St. Francis, St. Clare found the order of Franciscan women who became known as the Poor Clares, or simply Clares. August 11, 1993, was also the date on which the worldwide Franciscan family had chosen to celebrate the 800th anniversary of Clare’s birth.

The daughter of a noble family living in Assisi, Clare was known for her deep spirituality and love for the poor. Her heart was attracted to the radical way of life preached by St. Francis. Secretly, one night, to the dismay of her family, Clare met Francis and his small band of brothers to commit her life to God and to begin a community of women devoted to living the gospel. Clare and the holy women who followed her—and who continue to follow her in our day—have always been a revered part of the Franciscan movement. The Clares serve as vibrant models of contemplative prayer with God that all Franciscans are seeking.

Clare, whose name means “light” or “bright,” has indeed been a brilliant source of light for the Franciscan Order and the Church. At the time of my visit to the friary chapel, I had already chosen Lights as the title and theme of my book published in 1995. As I sat there looking at the picture of Clare and Francis, I asked Clare a favor on the occasion of her feast. Would she, in her goodness, share with me some light and advice on prayer and contemplative union with God?

Almost immediately, the realization came to me that if our prayer lacks vitality at times, it is because we are not relating to God, but only to concepts of God. The best prayer is not one that is satisfied with ideas about God, but one which seeks only the living God!

Suddenly, my awareness shifted. I left behind my ideas and concepts, as it were, and simply sat in the realness of God—the God of beauty, the God of far flung galaxies and vast oceans, the God of all nations and peoples of all centuries. During that “gifted moment” of prayer, the vastness and goodness of God touched me, not just theological concepts of these mysteries. I felt high—and at one with God.

The experience helped me understand why St. Francis spent whole nights in prayer, simply repeating “My God and my All!” He was not analyzing concepts of God. He was embracing no one less than the Most High God, who is lovelier and more vast and mysterious than any word or concept–the God who “is not far from any one of us, in whom ‘we live and move and have our being'” (Acts 17:27b-28).

It made me recall that prayer can be as simple and as silent as a loving couple holding hands and sitting in silent admiration before a sunset. It’s an experience—a relationship—and not an exercise in thinking. There is no need for words or thoughts. The couple is content simply to rest quietly and lovingly in each other’s presence.

Evaluating our prayer experiences, I know, is tricky. Prayer cannot be judged on the basis of “highs” or “feel good” experiences. All I can say is that for me my experience on Clare’s feast day was truly one of those lights that God gives each of us on our personal journeys. To this day I consider it a special gift from Clare.

My God and My All,
you are so much more vibrant
than our weak ideas of you.

Free us from the prison
of our narrow preconceptions and stereotypes
and let the real “us” embrace the real “you”
as you are!

Praise and honor and glory to you
forever and ever, Amen

(This E-spiration, was adapted, from a chapter of Friar Jack’s spiritual autobiography: Lights: Revelations of God’s Goodness (St. Anthony Messenger Press, 1995. It is still available at Amazon.com.)

The celebration began on Palm Sunday, April 17, 2011, which marks Clare’s leaving her home in Assisi to meet St. Francis and a small band of friars waiting for her at the chapel of St. Mary of the Angels (the portiuncula). There she joined the Friars Minor and entered the 2nd Order, now known as the Poor Clares. The 800th Anniversary Celebrations that began on April 17, 2011, will end on the feast of St. Clare, August 12, 2012. (The Poor Clare Sisters number over 20,000 sisters throughout the world.)

Reading his account, his experience, you cannot help but be moved…

We could all use some Light…