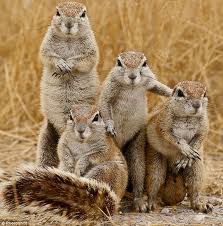 I wanted to start the morning with something funny!

You will later today read why 😕

A Friend sent this Joke to me, and the truth behind it makes it even FUNNIER!!!

Have a Most Blessed and Beautiful Day !

There were five houses of religion in a small Florida town:

Each church and Synagogue was overrun with pesky squirrels.

One day, the Presbyterian Church called a meeting to decide what to do about the squirrels.  After much prayer and consideration they determined that the squirrels were pre-destined to be there and they shouldn’t interfere with God’s divine will.

The Methodist Church got together and decided that they were not in a position to harm any of God’s creation. So, they humanely trapped the squirrels and set them free a few miles outside of town. Three days later, the squirrels were back.

But the Catholic Church came up with the best and most effective solution. They baptized the squirrels and registered them as members of the church. Now they only see them on Christmas, Ash Wednesday, Palm Sunday, and Easter.

Not much was heard about the Jewish Synagogue, but they took one squirrel and had a short service with him called circumcision and they haven’t seen a squirrel on the property since.