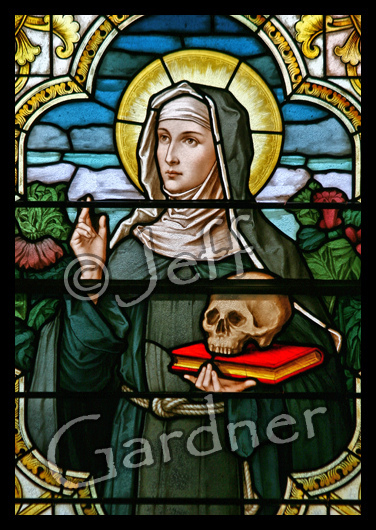 Today we honour a Saint whose intercession and example we really, really need…meaning me, of course!

In a nutshell, she was able to accept rebuke without becoming defensive.  Without providing justification.  Without pointing out others’ flaws and failure in turn. Without not really listening and just waiting for a pause to have her turn.

The above are tendencies many of turn toward when we receive any type of criticism.  Even when it is good-natured, sincerely provided for our betterment and growth, and provided lovingly.

St. Hyacintha of Mariscotti was able to receive correction humbly and gratefully.

She understood that correction truly is an act of charity.

And just as we should understand and receive it as such, we must also view and provide it with the same comprehension…

Hyacintha accepted God’s standards somewhat late in life. Born of a noble family near Viterbo, she entered a local convent of sisters who followed the Third Order Rule. However, she supplied herself with enough food, clothing and other goods to live a very comfortable life amid these sisters pledged to mortification.A serious illness required that Hyacintha’s confessor bring Holy Communion to her room. Scandalized on seeing how soft a life she had provided for herself, the confessor advised her to live more humbly. Hyacintha disposed of her fine clothes and special foods. She eventually became very penitential in food and clothing; she was ready to do the most humble work in the convent. She developed a special devotion to the sufferings of Christ and by her penances became an inspiration to the sisters in her convent. She was canonized in 1807.

Comment: How differently might Hyacintha’s life have ended if her confessor had been afraid to question her pursuit of a soft life! Or what if she had refused to accept any challenge to her comfortable pattern of life? Francis of Assisi expected give and take in fraternal correction among his followers. Humility is required both of the one giving it and of the one receiving the correction; their roles could easily be reversed in the future. Such correction is really an act of charity and should be viewed that way by all concerned.