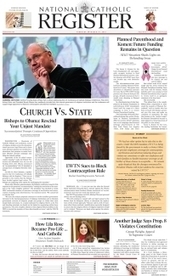 Via Scoop.it – From The Pews’ Puter…

As we sat listening to Fr. Jonathan’s homily that Sunday, I think we were all surprised to hear such an open discussion of this topic. Not only did he eloquently state the Church’s teaching, but then he issued a gentle message to anyone who may not currently accept this doctrine, challenging them to reconsider their stance. In the tone of a caring father, he suggested that each of us pray for conversion within the broader issue of respect for life and human sexuality, wherever we may be in need of it. He ended by saying, “This is at the heart of our Faith, because it’s at the heart of who we are as human beings.”

They can manipulate numbers.  We all can.

This stat could be true if I approach Catholics that are leaving Mass during the week, and I don’t mean like on Ash Wednesday.  I mean on any run-of-the-mill ordinary day.  I can approach 50 people and if 49 say yes, then my stat is accurate.

I can also manipulate it the other way and tell you that 98% of Catholics don’t pay attention in Mass.

I will then approach a bunch of Toddlers and the Parent’s that were taking care of them, as well as people that were late or distracted after Mass and ask them what the First Reading was about.

When they are unable to answer, then I will place them in the lot of those that do not pay attention.

You see what I am getting at right?  At least I hope you do.

Please take what the Media says about Americans. Canadians. Women. Men. Catholics. Or any other group they want to generalize about with a grain of salt.

Try to see what they are trying to make you believe that YOU should be believing and doing.

I Pray that those that sat in Mass with Ms. Fulwiler went home and questioned as well after hearing Fr. Raia’s Homily.
Via www.ncregister.com

3 thoughts on “Father, We re Ready for that Homily on Contraception Now | Blogs | NCRegister.com”