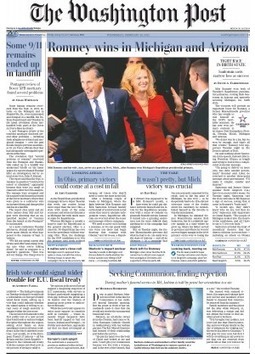 Via Scoop.it – From The Pews’ Puter…

Here is the source for The Crescat’s undeniable, unquestionable assertion.

I originally came across this story via Kat’s Blog. I have also been keeping up with it thanks to her updates.  Now, thanks to her again, there is a sense of validation but there is also as Mr. Thomas Peters nicely puts it:

I, for one, am tired of activists such as Barbara Johnson. A woman who used the very death of her mother for a political, anti-Catholic purpose. A woman who ran to the media with her story and an agenda while failing, for instance, to reveal that she no longer considers herself Catholic and evidently knows that this could pose a problem for her.

And I’m sick and tired of the media playing along with these agenda-driven personal stories while exercising zero vetting because they coincide with the media’s agenda.

Apparently, if a story paints the Catholic Church or a Catholic priest in a bad light, it gets green-lighted for publication with almost no due diligence.

I do not see this story being blasted all over the place:

Mr. Peters is bang on in asking WHO is bringing their politics.

One would think, hope, assume (obviously we are made arses out of) that the Media presents Facts in an unbiased manner.

That they check, double check and triple check their sources before sending a story to print. FRONT PAGE, no less, so as to not have the embarrassment, shame and utter humiliation of being deemed wrong, biased, mistaken, partial or any other label that should not be associated with a News Source.

But alas, this is not the case.