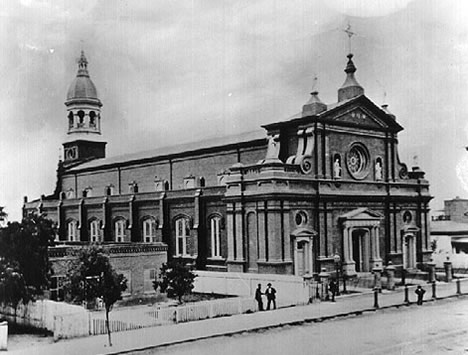 A fellow Blogger CMittermeier brought up some very valid questions and makes some wonderful points in her comments on the post just below this one, “Do these images offend you… | The Crescat”

One of my biggest failures is that I take for granted that most everyone knows what I do.  And those that do not I hope will be intrigued enough to research more about it.

Kind of what CMittermeier did.

You see, growing up I had the opportunity to live for a bit with my Mamá Lola in México.  Teuchitlán to be exact, which means Land of the Gods.  You know, I should share more of this with you…

In the meantime, if you click the link, on the word Teuchitlán you will find out quite a bit of my Family’s Heritage and Hometown 😉

But, as is usual, I digress…

Growing up with Doña Lola, as everyone affectionately calls her, even us, I learned a great many things about my Faith.  One being Consecration.  She always told us that once something was Consecrated, it was so Forever!  Hence why Priests that leave for whatever reason are excommunicated not just Un-Priested.  The same was true for the Monstrance, Chalice and all else that touched the Body and Blood of Christ.

Now this is precisely why the images The Crescat shares are so disturbing and yes, Sacrilegious!

Also, can the Church sell something that is Consecrated?  No. It is put away.

You can imagine the uproar when the Archdiocese of Los Angeles got rid of the FIRST Cathedral in LA!  And is now a Performing Arts Center!  It hurts deeply!  I remember when it was going on we were all in an uproar.  We thought it Blasphemous.  Personally, it still hurts me and many others, but we understood that the Altar Stone was removed.  Thus, the Consecration of St. Vibiana is not removed or anything like that.  The consecrated stone is and forever will be consecrated, and the structure is just that, a structure.

To explain it much better I have pasted below Fr. Z’s explanation on Consecration vs. Blessings, taken from Matthew’s Article in “A Catholic Life.” Which can be accessed via The Crescat’s post!  😉

If I forgot anything, do let me know, please!

We speak about the consecration of certain places, things and people.  People to be consecrated, for example, include bishops and some women who are virgins.  An abbot, however, is blessed.   A corner-stone of a church is blessed, but the stone of an altar is consecrated.  Priests can bless, but generally only bishops consecrate.
A distinction can be made about church buildings which are consecrated in a very special way called a “dedication”.  Also, while confirmation and ordination are also consecrations, in a sense, they are really separate sacraments.  There is a lot of debate about just what the consecration of a bishop really does, since they are already priests and priests, by their priesthood, can pretty much everything bishops can do.  Once upon a time, priests were permitted to ordain!  Some theologians think episcopal consecration really just extends the sacramental character already present, etc.  But I digress.
By constitutive blessings (blessings which make something a blessed thing) and by consecrations objects and people are, as it were, removed from the secular, temporal realm and given over instead to God exclusively.  It is as if they are extracted from the world under the domination of its diabolical “prince” and given exclusively to the King.  Before, they were “profane”.  After, they are “sacred”.  Thus, a consecration is a once for all time act.  Once something is consecrated, it is forever consecrated.  Blessings can be repeated.  Thus, harming or doing wrong to or with something or someone who is consecrated is thus its own kind of sin: sacrilege.
….
When considered from the older, pre-Conciliar rites, which we happily can use today, it is usually a bishop who consecrates chalices and patens.  It was/is possible to delegate a priest to consecrate these things.  The consecration makes these things suitable for the worship of God and being vessels for the Most Holy.
In the old days, chalices and patens (as well as ciboria for Hosts and monstrances or ostensoria for Exposition) had to be consecrated before they could be used at the altar.  In the new way of doing things, vessels can be consecrated (though I think in the new rites they just bless them in a sort of vague and good natured way) or they become consecrated automatically the first time they are used.  That is a real loss of a teaching moment, I think, but there it is.
….
Back to work… once vessels are consecrated they stay consecrated until something major is done to alter them.  For example, if the chalice and paten are worn and sent off to be regilded or repaired, they have to be consecrated again.
The consecration of these vessels also calls to mind the extremely ancient practice going back to the time of Pope Sixtus I (+c. 127) that only priests, whose hands were also anointed with chrism, could handle chalices and patens.  Remember also the good custom of kissing the priests hand, which is anointed and is raised in blessing and in absolution and which hold the Eucharist.
Constitutive blessings and consecrations are very important.  Blessing and consecrating solemnly could help people understand better the distinction of profane and sacred and how blessed and consecrated things can help us in our spiritual lives and our constant fight against the enemy of the soul.

One thought on “Great Points Brought Up About Consecration”