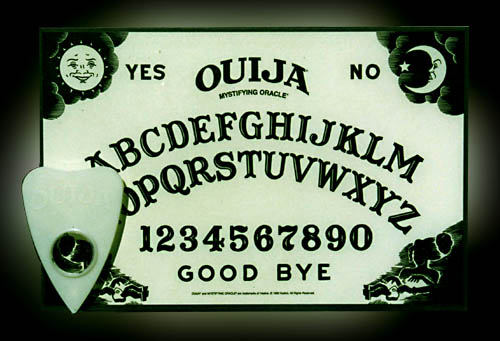 On my drive to work, as I was changing the CD – yes, sorry, no iPod in my vehicle, I still use the round little mirrors.  Truth be told, our other car still has a TAPE DECK!!! –  I heard Ouija Board.

Having had experiences with a Ouija Board, this of course, caught my attention.

I mean, come on, I know it’s owed to the time of the year, and it’s to be expected, ghosts, goblins and ghouls and all…and perhaps I should be mature enough to tune it out and continue with Christopher West, but…they were talking about how maybe, just maybe we shouldn’t be messing around with this thing.  I HAD to Listen!

The radio station had people call in to share about experiences that they had with a Ouija Board.  The three that I heard,  including the DJ’s were of course, eerie.  Another one of the DJs was certain that it was all fake, a game, blah, blah, blah.

Well, I am of the same mind as a gentleman that called in.  It’s not a “game” and it is creepy and  once you DO have it, you can’t get rid of it!  It comes back to you!

I was about 15 years old when I found my Mom’s Ouija Board.  I don’t know why she had it.  I just know she did.
She of course had it high up in her closet.  A clear indicator that we were to not touch it.
Translation: We HAD to See what it was. So, of course we grabbed it and used it.  😉

Some friends and I, I can’t remember who all was there anymore, I know it was Kim (she and I played together) possibly Michelle, Heidi, Shannon, ugh, I can’t be certain…anyway…we grab the thing, read the instructions, sat in a circle around it and two of my friends were the first to use it.  Other friends and I dimmed the lights and started making eerie noises, setting the mood, you know.

Well, nothing happened.  So we lit a couple of candles and tried to stop giggling and they tried again.

This time is started moving.

We didn’t say anything.  We just looked at each other, but our eyes gave away our thoughts, “She’s moving it!”

We were messing around.  We knew it didn’t work.

“Are you a Spirit?”  “What was your Earthly name?”

We thought we were so versed in the whole Séance thing.  Thank You, Hollywood!

The off-white plastic almost heart-shaped thingy with the clear circle would sometimes start off slow and then glide off the board.  Other times, it would go in circles and go to yes.  Sometimes to no.  It was rather random.

I can tell you this.  When it was my turn.  I would have bet anything that my friend was moving it!  I still think that at first she was.  Then…

I felt my fingertips get a bit warm.  The indicator, for I do not remember the “Terminology”, started going in quick circles and darted off the board.

We all looked at each other.  Our smiles were still half there.  A friend in a shaky accusatory voice said, “You guys are moving it!”

I stayed quiet.  Kim gave a weird look.  I just shook my head.

We did it again.  Kim asked it its name.

It spelled out Paloma.  Dove.

You would think we’d be scared.  But what occurred was actually out of a stupid horror flick.  Instead of throwing it back into the box, stashing it in the closet and running…we were the stupid characters that go towards where the Psycho Killer is as the music is Loudly Warning Everyone that it’s the Wrong thing to do.

Yup, that was us.

We continued playing.  It was as if the answer had unlocked the Dr. Frankenstein in us!

We asked many, many more questions.

Okay, so up to now, you’re thinking, “Big Wow! And why is she sharing this? What’s the point?  How does this prove any of what she set us up for?” 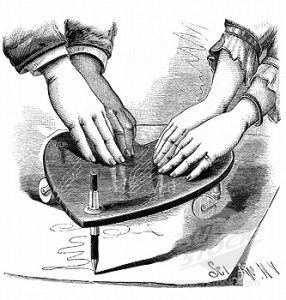 Well, here it is.

I asked it if I would be graduating from High School.  It said no.

You must understand, I was a Geek! A Nerd!  I LOVED School and excelled in it.  Therefore, for me to NOT Graduate was absurd.

When it told me no.  I asked it why.  It would glide off the board.
I swallowed hard and asked it if I was going to die before graduation.
Everyone looked at me.  But I know we were all thinking it!

The Board went around in circles and would not answer.  This made me more than a bit panicky and here’s why.

My whole life I have “known” that I am going to die in an auto accident.  I just know it, you know?  😉
It’s one of those things…it’s difficult to explain, but every time I see an accident it is familiar to me.  I have been in way too many near misses and survived more than my fair share of accidents.  I just know.

This perhaps provides you insight as to why I had to ask that question.

To lighten the mood, one of my girlfriends asked if she was going to marry her boyfriend.  It said no.  We laughed.  I remember that Heidi (she was there, because I distinctly remember this question) asked if she was going to marry Sean.  It said no.  She was heartbroken, but we all knew that answer.  Sean was our friend, but didn’t see any of us in that way.

Then, I got the brilliant idea on how to find out if I was to die.  I asked it to tell me who I was going to marry.
It went to the letter H.

We all laughed.  I wasn’t going to die!  Stupid, I know! But it gave me some solace.

Then I was intrigued.  I had a friend Harold.  So I asked if it was Harold and a bunch of H names.  They were all No.

I did not graduate from High School with all my Friends and Peers.  I dropped out in 11th Grade. Biggest mistake of my life!  Life was way too unbearable for me at the time, Drama at home, Drama at school, and I knew it all anyway!  I mean come on, I was 16 going on 17, watching Oprah, who knew everything, what more could I need!

Oh Youth really IS Wasted on the Young!!  😉

I married at 19.  A man whose name starts with H.  I could not guess his name that day because his name is So Long and So Traditional, that it would never, ever, ever have occurred to me!

This is not the bad or worst part of the Ouija Board.

When my Mom discovered that we played with it, not just this time that I shared with you, but many, many times, and apparently she was experiencing “things,” and after the Sacrament of Reconciliation, she discovered she was sinning, she threw it away.

A couple of days later, it was in the trunk of her car.  She didn’t think much of it.  She figured she forgot to trash it.

She threw it in the dumpster at work. A few days later, it was returned to her by a friend.  She tried ridding herself of it a few more times, but to no avail.
Finally, she left it with a Priest at our Parish and that’s how she was able to rid herself of it.

But…if this is not enough to convince you to not play Ouija.

A friend of ours, Alicia.  She played with the Ouija and it asked her to name the child she was to have later in life Lucifer.

Alicia did not know that this is another name for the Fallen One, for the Evil One.  She thought it was a nice name.  She told her Mom what she would one day name her child, she freaked out.  Grabbed the board and also tried ridding herself of it, but it would not go away.  Her house started developing many quirks.  The lights would turn on and off.  Doors would open and close.  The TV would turn off and on.

It took them months, Months! To be free of this!

I know I have not stressed the fear in this post (that’s what happens when you do it in pauses), but trust me, the Nightmares, the feeling that someone or something is watching you all the time, the fear of not knowing where it will turn up and know that it will, these are things that you do NOT need.

Oh, and I did stop listening to the Radio after the caller shared how difficult it was to be rid of a Ouija Board…I popped in my round mirrored device and listened to Christopher West speak of St. Joseph and how our Religious Art had failed him in portraying Him in a  Masculine, Hard-Working sort of way…